1) You Fail A Lot
You fail often, you fail quickly. This process is not at all rewarding because I can easily tell that the player has no  incentive to go on when she hands the game back to me after trying only twice. There is no flow to keep you going and the game doesn’t do a good job at telling you how exactly you failed. Running into an enemy and getting spotted in the open are the only two ways you can fail, but it’s not made apparent because there are no field of view cones and the game waits for exactly one second before it moves to the end game screen.

2) Zero Conveyance
The game has to resort to tutorial screens to explain the simplest of rules, including it’s control scheme. There aren’t enough intro stages to explain all the rules one by one. The rules :

Rules 1,2 and 3 are conveyed via tutorial screens in one level, and the last rule number 4 is explained in the one after. Players don’t read the short tutorial texts and the rules are never made clear.

The control scheme is new, players don’t understand how to properly use it unless I demonstrate it for them. Once they do understand, they have no trouble with it, they actually admit that it’s better than a traditional joystick for the freedom it provides by better understanding the player’s gestures.

3) Just Puzzles
The levels are very small (6x4) and every level has hardly more than one solution to it. The extra pickup is a nice twist but they’re mostly too hard to execute. In effect, players never beat a level taking a path I don’t know already. Some levels are less brains and more hands which are even harder to complete for those who are uncomfortable with the controls.

4) A Flawed Concept
I’d mention in an elevator pitch that it’s a stealth game about hiding in colors, and to keep with the simple minimal art style I had in mind, the player character is mostly hard to spot and sometimes even invisible. I expected players to understand that the character in control is the one that’s not moving on it’s own without player input (patrolling enemies) but it seems it’s not that obvious to most. I could make Bob stand out in some way but then I’d have to sacrifice the aesthetic style of the game.

How to Fix It
Only so much can be fixed really. A total of eighty levels have been completed and tested so it’s not feasible to change them all. Failing over and over is not fun and the players need to be encouraged to try again, the level now restarts itself automatically within a second of getting detected. The tutorial screens are useless because nobody has the patience to read through them, the player needs to be able to learn the rules by PLAYING the level instead of wading through a wall of text. 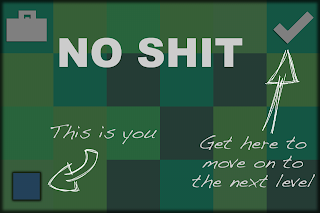 Also now on starting a level, Bob is revealed from under a cloud of smoke indicating to the player that there’s something special over there, perhaps the character they’re supposed to control. I don’t want to put more junk on the screen like a visibility meter, an outline on the player character or even a permanent joystick. If the game world is not doing a good job in explaining itself then there’s something wrong with it.

Now, how do you teach players a completely new way to interact with a game world behind a touchscreen?