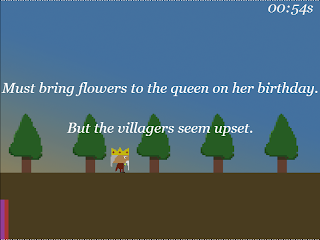 Having made small games within two or three days a couple of times before, my first time in the LD48 went pretty smoothly. I voted for only one theme and that’s exactly the one that was selected, we were tasked to make a game from scratch based on the theme ‘You are the Villain’ within exactly two days. I wrote ‘The Mute King’ in HTML5 which is available online here, thoroughly tested on the latest versions of Chrome and Firefox only. 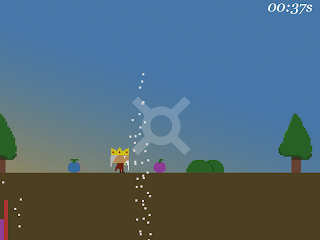 It’s a small side-scrolling game where you avoid enemies to get to your goal. Mouse gestures can be used to cast various spells that help you out in different ways and potions can be picked up to replenish your health and magic points. The first thing I’d like to discuss is the spell system. I learnt my lesson two times over with Instance and instance1000 but it appears that I’m a very slow learner. Hidden mechanics mostly haven’t worked out for me, I understand the risks involved and the costs it incurs but the reward if you can pull it off properly, is priceless. I expect the player to discover something that I have not made apparent, lacking even the slightest indication of what exactly needs to be done. Instance took it a little bit too seriously by locking the player out and disallowing any progress whatsoever. The Mute King (now TMK) acknowledges the fact that to instill even the slightest sense of true discovery in the minds of the players, it must wait for them to do so at their own pace. The game structures itself in a way that encourages players to come back to it again with more knowledge of  it’s systems which they might gather each time they play. I haven’t had it play-tested so I have no legitimate statistics to throw around, but it seems that leaving all the gestures a mystery to the player was not a great idea. From the few who did provide some feedback, around half of the players found the experimentation a chore and said it was irritating because they start the game without knowing even a single ability. Perhaps I was wrong, from the total of eight recognized gestures in the game, four are simple directional swipes, each of which has a unique symbol that can help you identify it. One can still progress without knowing most of the skills, it’s possible but a lot more difficult without some abilities. Giving more power to the avatar by having a traditional skill system is something I didn’t want, it’s done too often which makes it utterly boring for both the player and myself. 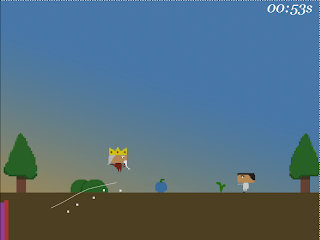 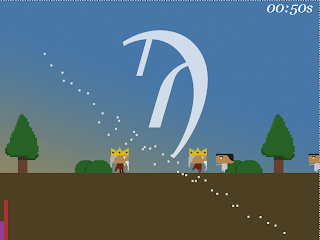 If there is one thing that I’m really proud of it would be the well-knit nature of the different entities in the world. Every game object has some role to play, combined with the few dangerously powerful spells, it promotes players to experiment and look for different combinations that might make it easier for them to reach the queen. I was overjoyed when I read about a player who found a strategy whereby they would cast two spells infinitely one after the other, a strategy that enabled them to beat the game which they found extremely difficult. The two spells were connected by a specific kind of game object, the product of the first spell was the resource for the second and the resource for the first spell was the product of the second, a loop that didn’t occur to me earlier. Now you’d call this bad game design but I believe that’s not true for an experience which is meant to last for a mere five minutes. I could have been more careful with the interrelationship of spells and their related game objects but that would just leave players with lesser freedom to discover new tactics.

Play it and see if you like it, I think this game has some potential so I might redo it with more spells and objects - perhaps a top-down hack and slash with a full fleshed out story taking players on an epic journey across thousands of miles of a mystical land with countless secrets to discover and interesting characters meet.